Sylvia Broady
Hull is the city of my birth, but I have lived in the Beverley area for the past 20 years. I have a family in Hull and a family in Australia. Travelling to shores, both near and far, is often on my agenda. What keeps me young at heart? My grandchildren and my zest for life.

Today I have returned to my blogsite after a long absence. I am grateful to my fellow writer, Linda Acaster, who runs a very successful blogsite, for nudging me in the right direction. After the demise of my publisher, Hale, I seemed to be in a place far removed from the publishing world, but I never stopped writing because it is my passion, though sometimes it was hard to have belief in myself. Now, I have a lovely agent and she has restored my zest to be published. So, 2018 will be my year to return to the publishing world and once more to be on the bookshelves of everywhere possible.

On Saturday 28 April, Linda and I are attending Anita Chapman's Social Media Course for Writers. It will cover: Twitter, Facebook, Instagram and blogging for writers. I have accounts for all four, but do not use them to their full advantage. As a published author, publicity for promoting ones books is vital.
Posted by Sylvia Broady at 05:53 1 comment:

This is my first book to be reviewed in the Historical Novels Review magazine and I feel proud to merit such a favourable review.

In one of the best starts I've read, Rose bumps into a sad and drunken airman while on her way to help at the centre for WW2 bombing victims. This is a fine saga of great humanity set in working-class Hull, England. There are many war books but few of the result of war. With the ending of WW2 the 'peace' seems worse than the war itself. Predictably the dreary post-war period shows qualities of the British character under pressure.
Rose says goodbye to her boyfriend, Harry, whom she hopes to marry after the war. Shocked at a letter from him saying 'it's all over,' she endures  her pain and starts to help others in air raids. There are details of streets and cafes in wartime Hull, where Rose and her friend Sally move, and conditions of impoverished war-weary homes. I well remember Dali prints in British restaurants, set up by the government to assist production and maintain a good diet.
But Harry returns, expecting Rose's love, and so a triangle begins which, with family complications, continues to the end of this story of Rose finding a man when young men are short. With a jealous, selfish boyfriend, the now-helpful airman with a  young son, and Rose trying to do her community work, this is a poignant telling of  loving human contact. The smell of hair, the warmth of cheeks and softness of arms make it a very touchy novel.
When Rose's brother brings  home a German wife pregnant with the baby of his dead army colleague, the family is torn with anti-German feeling. Rose stands firm as peacemaker. The German mother dies in childbirth, compounding problems further, but all ends well.

Posted by Sylvia Broady at 05:48 No comments:

A Memorial Plaque on the site of the old Savoy Cinema

The extract, below, is taken from a scene of my novel, A TIME FOR PEACE. My late husband, when a young boy, witnessed the attack. He told me the story many years ago and I have never forgotten it. My story of fiction is based on facts, and is seen through the eyes of a young woman, Rose.

The Memorial Plaque is on the site of the old Savoy Cinema, now W. Boyes, and it commemorates the people of Hull who were killed and injured in that attack by the Luftwaffe. 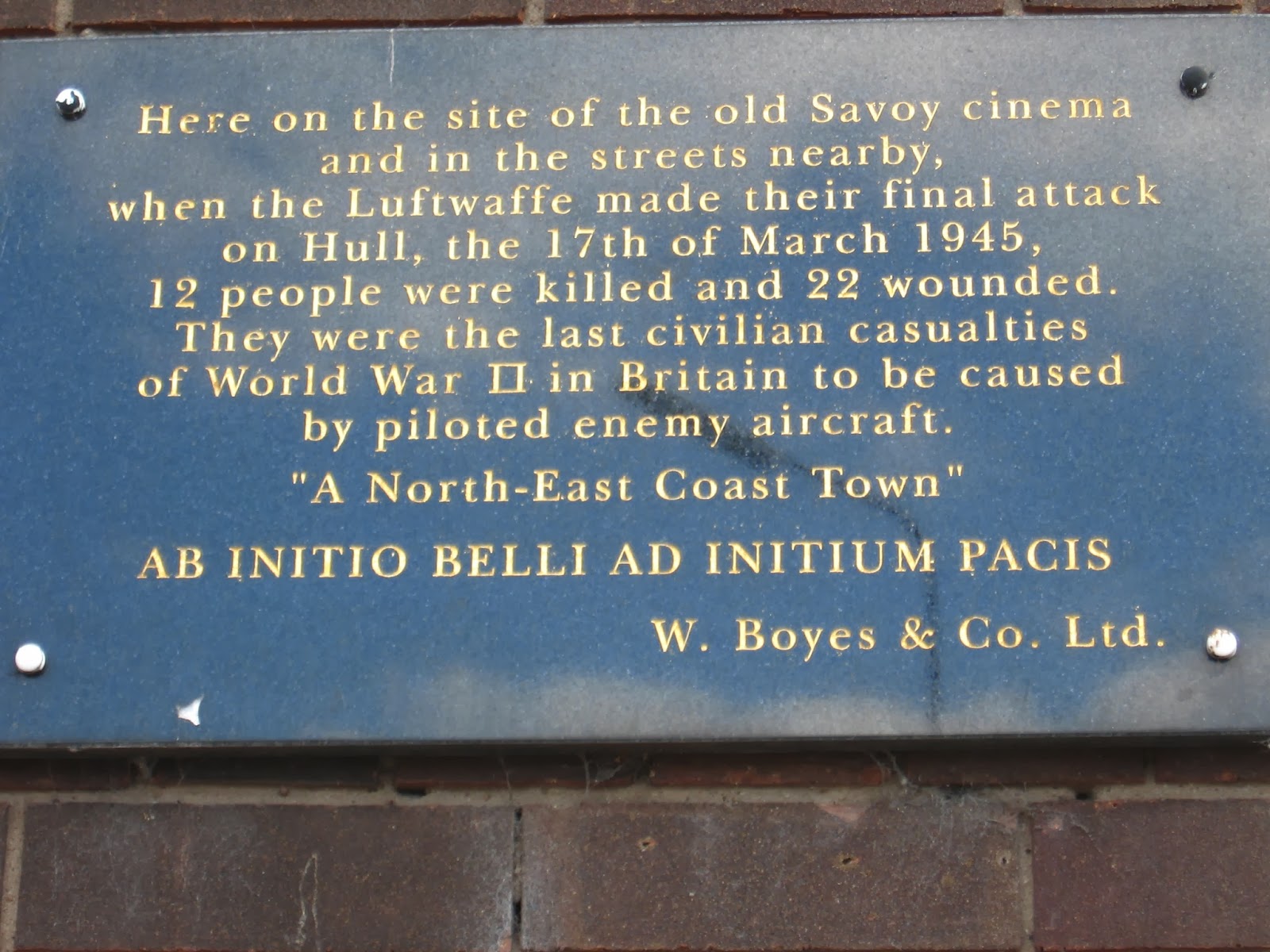 Posted by Sylvia Broady at 07:20 No comments:

EXTRACT FROM "A TIME FOR PEACE"

On reaching Holderness Road, she heard the sound of the siren, warning of an enemy attack. The noise was so deafening, frighteningly so, even though she had heard it many times before. It couldn't  be a raid. All the talk was of the war ending, so surely it must be a mistake?
Ahead of her, further along Holderness Road, she could see that  the picture-goers were leaving the cinema and streaming out in all directions. Something made her glance upwards to the dark sky above and she heard the noise of an aircraft. She squinted, seeing nothing, and then it was just above her head, the enemy plane so low she could see the pilot in the cockpit. She jumped back in fear as the  plane dived lower, its machine gun blazing. Then the ground beneath her shook as a bomb exploded. She was flung against a door of a shop as its plate-glass window smashed into smithereens. Screams filled the acrid air, her eardrums felt like bursting, lights popped and flashed, a kaleidoscope of colours stinging her eyes. Heat whipped round her body and falling masonry rained down upon her head, hitting her hard. She lifted up her arms to protect her head and face, closing her eyes in an attempt to ward off her mounting terror. There was an unnatural silence, and then panic broke loose. People were shouting for loved ones and  friends. Opening her eyes, Rose saw the  carnage all around her and her body went cold at the horror. A woman was cradling an older woman, a man was clawing with his bare hands at a pile of rubble, cries and moans filled the air, and everywhere there was  smoke and rising heat.
Her first thought was for her parents. She struggled to her feet; her knees were bleeding, her hair and face were covered in plaster and bits of debris, and her coat was torn. But she was alive. With shaking limbs, she negoited the path strewn with obstacles of bricks, fallen timbers and broken glass.
She plunged foward. She had to find her parents.

Posted by Sylvia Broady at 05:03 No comments:

A TIME FOR PEACE OUT NOW IN BOOK SHOPS

I am thrilled to announce that my latest novel, A TIME FOR PEACE  is now out in book shops and I am inviting you to my 2 book signing sessions.

Love to see you and welcome your support, and to chat about books and writing.

Hope you can make it.
Posted by Sylvia Broady at 12:03 No comments:

Coming soon! "A TIME FOR PEACE"

The date is through at last! My new family saga is being launched by Robert Hale Ltd on 29th November 2013. Here's the blurb and cover of A TIME FOR PEACE.

A time of peace follows the victory of WW11, but with peace comes unforeseen problems. Demobbed men are strangers to their families. Women have managed on their own, keeping their families safe and fed. It may be a time of peace, but it is also a time of challenge, especially for Rose, whose job is to help others. When Rose meets a demobbed airman, Joe, and his motherless son, she gives them her support and friendship and gradually her heart.When Rose's brother, Freddie, comes home from Germany with a pregnant wife, the woman is shunned by neighbours as the enemy. And Freddie has a secret, which threatens to destroy Rose and Joe's relationship. In a time for peace, the strength of Rose and Joe's love is tested. Can they sustain their love in such adversity and build a future together? 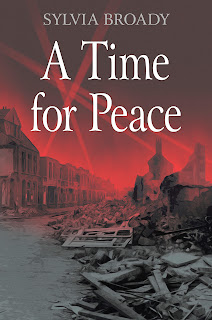 Yesterday I had a fantastic and interesting guided tour around the Arctic Corsair Trawler. This is part of my research for my next novel, set around the fishing community of Hessle Road in the 1950s.  Now a museum, the trawler is moored on the River Hull in the old  town. Our guide, John, who comes from a fishing background, was a mind of stories and information. I listened intently and making mental notes and a few pencilled ones. What struck me was the dangers that the deep sea trawlermen faced in the Icelandic fishing grounds and the hazard conditions they worked in. But shining through was the spirit and comradeship of the men, it is ingrained in the very fabric of the trawler.  Down below, there are written testaments to this. The tour and  the 10 minute action film lasted one hour and 30 minutes.
A great experience and well worth the visit.

Posted by Sylvia Broady at 05:32 No comments:

A TIME FOR PEACE

With peace comes unforeseen problems and a time of challenge... 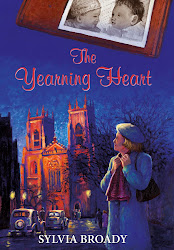